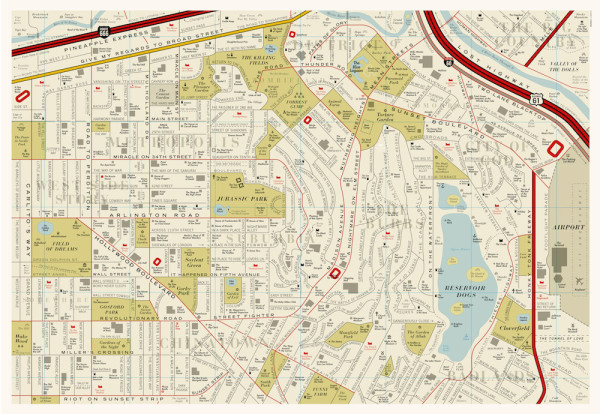 British designers from Dorothy created some really cool vintage-looking maps featuring locations from movies, books and even songs – exactly what we love at LegendaryTrips!

They started with an exhaustive song map pinpointing 390 geographically minded song titles based on their inspiration. Where are those ‘Strawberry Fields Forever’? Not far from ‘Penny Lane’ one may think. We just hope the beautiful ‘Heartbreak Hotel’ is not on the trashy ‘Boulevard of Broken Dreams’. Let’s not mix wheat and chaff, mind you.

According to Dorothy’s Ali Johnson “There is no real order. Other than that really seminal songs tend to appear as main routes or places befitting their importance. I suppose the map grew like some of our cities and towns: a little haphazardly.”.

Following up on the success of this first map they created two more: one for books and one for movies.

Dorothy’s Film Map is loosely based Los Angeles’ topography and very little on the actual locations of the movies it features. Rather than sticking to reality it creates a new world where inspiration and imagination transcends facts. This leads to, for example, Reservoir Dogs becoming a large pond hosting Leonard Di Caprio’s islands: The Island and Shutter Island.

The last project of Dorothy’s – the book map – is also an interesting one. Based on the same concept of the song and film maps it puts together over 600 books from the history of English literature on an old London street map. Much better than a boring To-Read book list, it will push you to read the classics you haven’t read and feel proud about the ones you have!

Check out these 3 great maps below. Oh, and yeah, you can actually order a nice printed edition on Dorothy’s site for as little as £20 ($34).