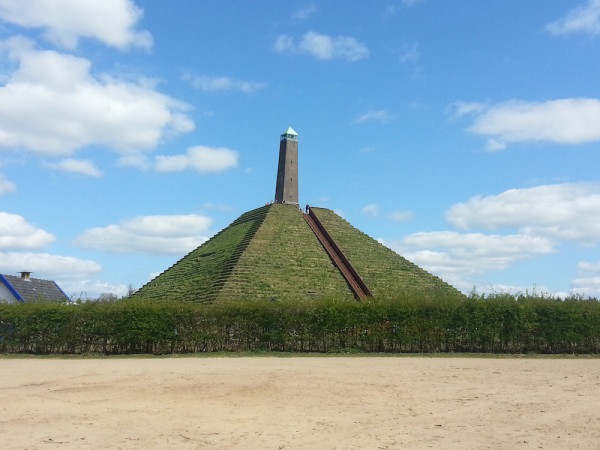 Last month we introduced Microadventure, an exciting travel concept by Alastair Humphreys encouraging people to turn their 5-to-9 life into exciting adventures rather than wait the whole year for holiday time!

With this in mind, I was thrilled when a couple of friends organized a weekend cycling session to explore the area around Utrecht (Netherlands) that happens to have woods and hills. Yes, you have read correctly – I also couldn’t believe my ears at first – there are hills in the Netherlands!

That’s how on an April Saturday morning that could have put to shame some of the customary mild summer days in Holland, I embarked with my friends on a 50 km (31 mi) cycling adventure from Veenendaal to Utrecht. We went through some beautiful woods and hills as advertised. It was a great invigorating experience – a pure shot of nature and fresh air just one hour away from Amsterdam!

On the way we made the most unexpected discovery: the Pyramid of Austerlitz. I’m quite fond of Napoleon‘s History so this was a very exciting surprise. I find the battles of Austerlitz and Waterloo especially fascinating, the first symbolizing the apogée of the Napoleonic Empire and the second its ultimate demise. Interestingly, Austerlitz was narrated in great details by Leo Tolstoy in War and Peace through the eyes of Mikhail Kutuzov while Victor Hugo tackled Waterloo in Les Misérables. In any case, I had never thought of Austerlitz as a village in the Netherlands.

Although it may not be your first pick if you visit the Netherlands, I would warmly recommend to make a detour by the Pyramid of Austerlitz if you have the opportunity!

How to get there