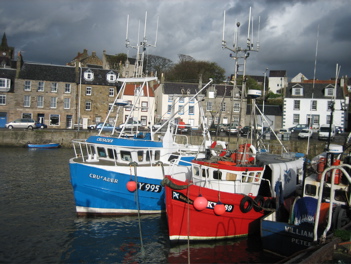 We did this trip to explore Scotland back in 2005 when my brother was a student in Glasgow. Scotland is part of the United Kingdom, which consists of four countries: England, Scotland, Wales, and Northern Ireland. Nessie’s country rhymes with the mystic Highlands, beautiful lochs, thick fog, untouched lands, distilleries, and .. single malt whisky! A piece of advice: make sure you avoid confusion between the Scottish and the English; they don’t like it much due to a not-so-peaceful history between the two countries.

Favorite destinations of the trip (by order):

We arrived at Glasgow Prestwick Airport after a really nice flight (French and English coasts…). Our first mission was to get the keys to the car we had rented at Hertz. Then, we were all ready to head to Glasgow!
The road is not too long and allowed us to get used to driving on the left. Our first vision of the city was the south with its declining industrial boroughs. However, as soon as we had passed River Clyde, we saw how modern and dynamic the city center was.

After dropping our bags at the hostel, we went for an insightful tour of the city and then had a great lunch in a big pub: the Counting House, which faces the City Council on George Square. Interesting fact, Glasgow has the third-oldest underground metro system in the world after the London Underground and the Budapest Metro. Its nickname is “The Clockwork Orange”: a circular line with orange coaches.

Next morning, we headed Northeast toward Edinburgh, crossing River Forth via the famous Firth of Forth Bridge – where a classic scene of Hitchcock’s “The 39 Steps” took place-, and then reaching The Kingdom of Fife that boasts many charming fishing villages.

Following the road along the coast, we passed by several superb villages: Elie, St Monans, Pittenweem, Anstruther, and Crail. Those fishing villages reminded us of the coast of Brittany. After lunch, we went to St Andrew’s: the Golf’s world capital, a sport that was born in this city.

St Andrews is also the host of a giant abbey in ruins (the largest church ever built in Scotland) and a world-class university (the University of St Andrews is the third oldest university in the English-speaking world). In a nutshell, a very nice city with a long-standing history and royal buildings!
Right after St Andrews, we left the inhabited areas to finally discover the Highlands. Our goal was to make it to Braemar, the sports station of the Highlands, before the night. That’s what we did and eventually got some rest!

The next day was the day we finally were to meet with Nessy..! Waking up early, we drove and discovered majestic Scottish landscapes full of fall colors. Our goal was to reach Inverness which gives access to the Caledonian furrow, in which the world-famous Loch Ness lies. Warning: journeys in a car can be pretty long in the Highlands! However, thanks to the road trip we saw gorgeous and odd countryside landscapes: dense forests from which you emerge only to witness entirely tree-less plateaus, only covered with heath. Owning a Routard guide or good-quality maps is a real advantage for tourism in Scotland, especially in the Highlands, otherwise, you may miss some marvelous lochs with intriguing castles partly in ruins…No worry regarding roads, they all are very well maintained!

Arriving in Inverness, we were glad to quickly find the famous “Leakey’s Second-hand Bookshop“: an amazing place where you will enjoy a delicious lunch – before getting lost in the thousands of books surrounding you.

After this pleasant stop, we headed for Fort Augustus on the other side of the Loch Ness! Making it by the end of the afternoon, we just had time to book the dinner before rushing to our hostel a bit further on the banks of the Loch… We were ready to taste the national dish: Haggis (rumen of stuffed sheep). We found it pretty special and quite strong, but in the end, it’s good! Back at the hostel, it was time to quietly seat on the shore and watch the tiny waves on the loch… What a feeling!

It was then time to head for the west coast. On the road, we kept on enjoying great views of lochs and te Ben Nevis, the highest summit in the UK (1,344m), but that was unfortunately the rainiest day we had during our trip… We had to let go of our hiking projects! We decided to drive straight to Oban. We saw a few castles in ruins on the road and even visited one (THE thing you must absolutely do in Scotland). When arrived in Oban, we discovered a charming town lighten by a colorful sky (the weather changes very rapidly there).

At first, we found the Oban Coliseum a bit weird. This replica from Roma’s coliseum is located on the heights of Oban. It was built by a successful local man who wanted to keep local men employed during hard times in the region. Once you’re up there, you’ll admire an awesome view of the bay and the town. Don’t miss it! It was then time for us to head south. We stopped once again at Inveraray: a small village completely lost on the side of a loch.
We finally made it back to Glasgow at our hostel for a nice rest before our last day… Edinburgh!

Edinburgh, the capital of Scotland… A very touristic city that enjoys a high reputation whether about culture, education or business! We drove straight to parking below the castle and bought our (pricy) tickets. Edinburgh Castle is Scotland’s most-visited attraction and offers a gorgeous view all over the city. On one side is the old town and on the other the shiny new districts.

The castle has several museums that give you a hint of the eventful history of the country. A must-do! We then had lunch in the restaurant where Harry Potter was born: The Elephant House. They serve decent food and have awesome coffee and tea. We then had only time to see the Queen’s residence when she comes to Scotland, before hitting again the road to Glasgow for the end of the trip and the return to France.