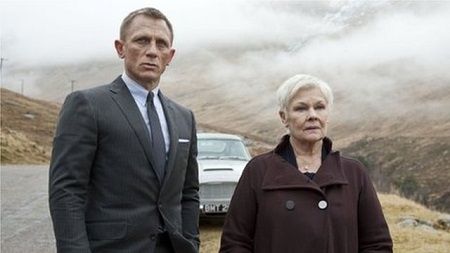 Skyfall is the twenty-third opus of the James Bond series and the third starring Daniel Craig as the famous MI6 agent. This time James Bond is caught in the middle of a duel to the death between M (Judi Dench) and Raoul Silva (Javier Bardem), a former agent left for dead seeking revenge.

Under the direction of Sam Mendes (American Beauty, Road to Perdition), the James Bond series take a dark turn with a refreshing realism that contrasts with some of the eccentric (and let’s say it, poor) previous episodes like Moonraker or, more recently, Tomorrow Never Dies.

In Skyfall James Bond’s adventures to save M and the MI6 take him through Turkey, England (of course!), China (Shanghai, Macau), Japan (Hashima island), and Scotland (Glencoe in the Highlands).

Skyfall starts with a chase in Istanbul in Turkey, the first of Skyfall filming locations. James Bond (Daniel Craig) and Eve Moneypenny (Naomie Harris) are after Patrice, a mercenary carrying classified information about NATO undercover agents. The chase takes Bond through Eminönü Square (where you can see the Yeni Mosque also called New Mosque) and Istanbul’s Grand Bazaar (see a photo here).

2. Fight Scene Atop a Train

The chase takes James Bond on top of a train in an uncomfortable position where his colleague from MI6, Eve Moneypenny, shoots him by mistake. Patrice escapes and James Bond is believed dead after falling in the water beneath Varda Viaduct.

Presumed death gives James Bond the opportunity to take a well-deserved holiday in Fethiye, still in Turkey, with a beautiful creature.

The bar on the beach where our secret agent plays a rather dangerous drinking game involving scorpions was built for the movie on Koca Calis Beach.

M (Jud Dench) is driven in London through Parliament Square and Whitehall (near the Tower of London) to feel the heat from Gareth Mallory (Ralph Fiennes), the Intelligence and Security Committee Chairman, for the failure of the operation in Turkey. The meeting takes place at 10 Trinity Square (Trinity Square Gardens).

After the meeting with Gareth Mallory, M returns to MI6 headquarters in the Secret Intelligence Service building in Vauxhall, only to see it blow up by a terrorist attack.

The funeral of the victims from the SIS building explosion takes place at the Old Royal Naval College in Greenwich, London.

After the funeral ceremony, M returns to her house located at 82 Cadogan Square in London, between Knightsbridge and Sloane Square. There, she finds her best agent, James Bond who decided to come back from the dead after hearing about the attack on the MI6.

With the SIS building in Vauxhall destroyed, James Bond is taken to MI6 secret underground facility whose entrance is located at Smithfield Car Park. The Old Vic Tunnels (disused railway vaults below Waterloo Station) were used to represent the interior of the base.

In need of serious spy equipment, James Bond meets with a young and tech-savvy Q (Ben Whishaw) at The National Gallery located on Trafalgar Square in London.

They meet in museum room 34 where you can catch a glimpse of ‘The Fighting Temeraire‘ painting by Turner.

The bullet fragments found in James Bond’s body send him on the trail of a hitman in Shanghai, China. The rooftop swimming pool where James Bond takes a dive is actually the one of the Virgin Active Health Club located in Canary Wharf in London.

Likewise, the high-rise building in Shanghai where James Bond sees a hitman entering is actually Broadgate Tower at 201 Bishopgate in London. If you go there, it’s easily recognizable by its triangle metal construction in front of the Primrose Street entrance.

The scenes in Macau where James Bond meets Sévérine (Bérénice Marlohe), the delicious mistress of vilain Raoul Silva, were shot in Pinewood Studios in Iver Heath.

The deserted ‘Dead City’ island of Raoul Silva where James Bond is taken after being captured is Hashima Island in Japan.

After being captured and sent to the United Kingdom, Raoul Silva escapes and James Bond goes after him in the London subway (tube) from Temple station to Embankment on the District and Circle Lines.

Soon after subway trains crashed under another terrorist attack orchestrated by Silva. James Bond then realizes that the capture of Silva was a set-up and rushes out of the subway at Westminster Station heading to the Parliament to save M from Silva.

James Bond gets to the parliamentary hearing after Silva already started his attack but is still in time to save M. Together they escape using James Bond’s DB5 Aston Martin hidden in a garage in Arklow Road.

James Bond and M head to Bond’s family mansion ‘Skyfall’ located in Glencoe in the Highlands to lure Raoul Silva out in the open. In the movie, you can see the beautiful peaks of Buachaille Etive Mor (photo) and Buachaille Etive Beag.

Sadly, ‘Skyfall’ is not an actual building – it was built just for the movie in Hankley Common in Surrey.

In case you haven’t seen the movie (which is unlikely if you are on this page, but still..) we will not reveal the aftermath of the battle between M and Raoul Silva with James Bond in the middle. Let’s just say that James Bond prevails (like always) and, for the last scene, stands on top of the building of the Department of Energy and Climate Change at 3 Whitehall Place in London.