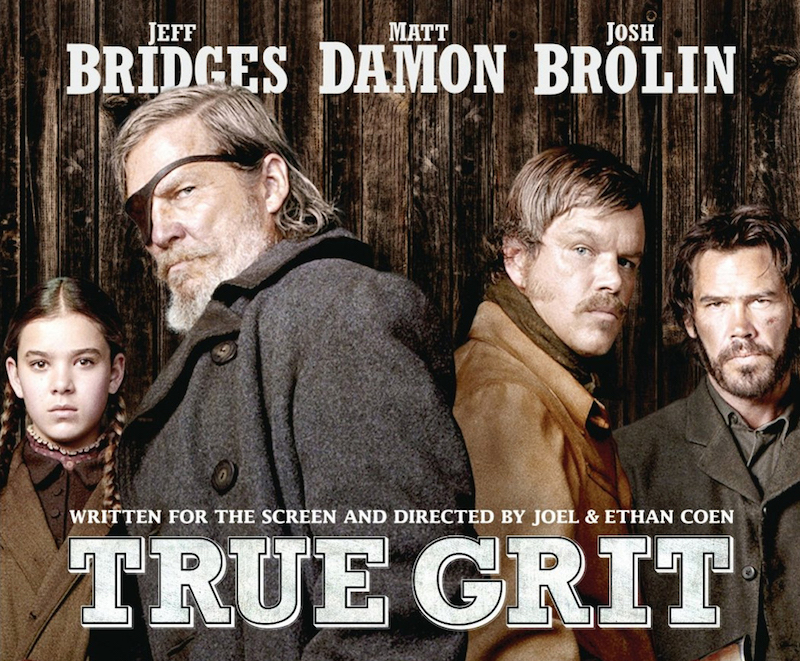 True Grit (2010) is a film by the Coen brothers based on Charles Portis’ 1968 novel of the same name where a tough Marshal helps a stubborn teenager track down her father’s murderer. Coens’ adaptation is the second after the 1969 version starring John Wayne.

True Grit is yet another example of how the Coen brothers can apply their virtuosity to literally any genre. After neo-Western No Country for Old Men (2004), True Grit is the Coen brothers’ hommage to Western in its most classical form and strikes by its simple perfection.

While at first not so obviously marked by the Coen brother’s style, True Grit still features all the distinctive savorous traits of their movies like razor-sharp dialogues, contemplative scenes, and mystical bits. Part of the magic formula is, of course, True Grit’s outstanding cast, led by Jeff Bridges as Marshal Rooster Cogburn.

In between Cogburn’s unintelligible mumblings, grumpy and arrogant facade, and the burden of a painful past, shines through unwavering righteousness – that very rare True Grit. Instead of following the footsteps of John Wayne (who won his only Academy Award for this role), Jeff Bridges makes his own path and gives a unique substance to the one-eye Marshal.

The beautiful natural sceneries of True Grit showcase New Mexico where most of the outdoor scenes were filmed. Texas was also used as a stand-in for Arkansas’ Fort Smith.

True Grit starts in Fort Smith, Arkansas. Granger in Texas was used as a filming location because of its empty lots between brick buildings and its rail terminus. Wood buildings from rough-sawn lumber were constructed especially to represent Fort Smith in True Grit.

Sheriff: Hmm, I’d have to think on that. Bill Waters is the best tracker. He’s part Comanche; it is a pure joy to watch him cut for sign. The meanest is Rooster Cogburn; a pitiless man, double tough.Fear don’t enter into his thinking. I’d have to say the fairest is L.T. Quinn; he always brings in his prisoners alive. Now, he might let one slip by evry now and then, but…

Mattie Ross: Where would I find this Rooster?

The courthouse scenes of True Grit were filmed at the Old Blanco Courthouse in Blanco, Texas. This True Grit filming location was chosen because built-in 1884, it was somewhat matching the style of True Grit’s period.

Cross-examining Lawyer: Mister Cogburn, in your four years as US Marshal, how many men have you shot?

Cross-examining Lawyer: Let us restrict it to killed so we may have a manageable figure!

As the story kicks in, the trio made of Maggie, Cogburn, and LaBoeuf go on the trail of Tom Chaney in Indian territory (modern-day Oklahoma). Most of the outdoor scenes of True Grit were filmed around Santa Fe in New Mexico with the Buena Vista Ranch as one of the main True Grit filming locations.

New Mexico is quite prized by Western films for its locations and True Grit with its beautiful scenic nature shots didn’t make an exception to the rule.

In case you are wondering why the Coen brothers didn’t film True Grit in Arkansas to match the novel, read this.

If he is not in a shallow grave somewhere between here and Fort Smith he is gone. Long gone! Thanks to Mr. LaBeouf, we have missed our shot. He barked and the birds have flown. Gone. Gone. Gone! Lucky Ned and his cohort gone. Your fifty dollars gone. Gone the whiskey – seized in evidence. The trail is cold, if there ever was one. I’m a foolish old man who’s been drawn into a wild goose chase by a harpy in trouser and a nincompoop. Mr. LaBeouf, he can wonder the Choctaw Nation for as long as he likes. Perhaps the local In’jins will take him in and honor his jibberings by making him chief. You, sister, may go where you like. Our engagement is terminated. I bow out.