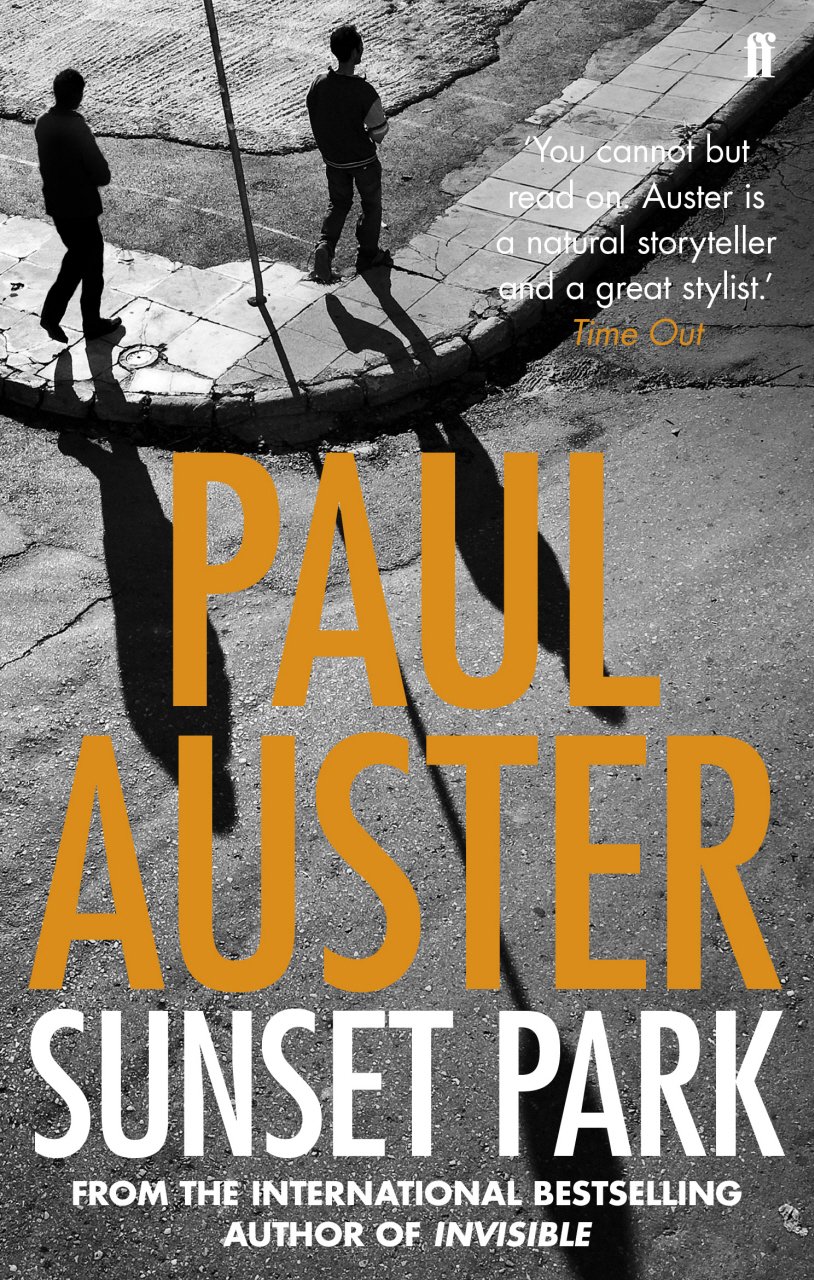 I have always been fascinated with Paul Auster. Reading The New York Trilogy was an incredible experience that left a profound impression on me. Even now, after all these years, I can still remember this feeling of nothingness and absurdity derived from those three poignant stories that looked harmless at first, hidden behind the ordinary traits of hard-boiled.

The New York Trilogy was like opening Pandora’s box and soon after that, I devoured the rest of Paul Auster’s work, each title providing more depth to his running themes like identity and fate but also revealing new ones.

In Sunset Park, Paul Auster’s latest novel published twenty-eight years after his first work The Invention of Solitude, the author provides a subtle social commentary through the eyes of endearing characters struggling with existential and personal issues in the midst of the 2008 financial crisis.

Sunset Park is centered around Miles, a college dropout who decided to sever the ties with his family and live a life of penance, working blue-collar jobs throughout the United States, in search of redemption for a flash of anger that had the most dramatic consequences.

Around Miles gravitate characters from different generations: his divorced parents and step-mother entering the winter of their lives and his friends and housemates with whom he squats an abandoned house in Sunset Park in Brooklyn, New York.

Sunset Park is full of hope with a few menacing clouds of fate. The hardship of the young and the older generation mirrors the difficulties of the WWII veterans returning home in The Best Years of Our Lives, a 1946 film running through the novel.

Although probably not the best introduction to Paul Auster, Sunset Park is still an interesting key to the writer’s universe. The novel takes mainly place in New York and it’s a delight to see the city through Paul Auster’s eyes, to feel it through his words. In Sunset Park, the Big Apple itself is the symbol of intergenerational issues with the ‘old’ New York of Paul Auster’s younger days slowly disappearing.

Continue reading below to discover all the places from Paul Auster’s novel Sunset Park and get inspiration for your next New York trip, be it in dreams or actual footsteps.

All extracts from Sunset Park are copyrighted by Paul Auster and Henry Holt and Co.

‘The sprawling flatlands of south Florida are filled with these orphaned structures, and because it is in the interest of the banks to resell them as quickly as possible, the vacated houses must be cleaned, repaired, and made ready to be shown to prospective buyers.’

‘The entire story of his life hinges on what happened that day in the Berkshires, and he still has no grasp of the truth, he still can’t be certain if he is guilty of a crime or not.’

‘It was a Sunday afternoon in late spring, and he and his father were walking side by side through the West Village, on no particular errand, he remembers, just walking for the sake of walking, out in the air because the weather was especially fine that day, and after they had been strolling for an hour or an hour and a half, they sat down on a bench in Abingdon Square.

For reasons that escape him now, he started asking his father questions about his mother. How and where they met, for example, when they were married, why they hadn’t stayed married, and so on.’

‘Curiously enough, the theater wasn’t far from where they were sitting now, his father said, the old Circle Rep on Seventh Avenue. It was October 1978, and she was playing Cordelia in a production of King Lear, a twenty-four-year-old actress named Mary-Lee Swann, a glorious name for an actress in his opinion, and she gave a moving performance, he was stirred by the strength and groundedness of her interpretation, which bore no resemblance to the saintly, simpering Cordelias he had seen in the past.’

The Circle Repertoire Company was a theatre that ran from 1969 to 1996 – it moved to Seventh Avenue in the early 1970s. Many famous actors have emerged from the Circle Rep like Ed Harris, Jeff Daniels, Laurence Fishburne, John Malkovich, and Demi Moore.

‘An unexpected congruency, perhaps, in that she was a country girl from a backwater in central Maine and he was a lifelong New Yorker, born into a modicum of wealth whereas she came from little or nothing, the daughter of a man who worked as the manager of a hardware store, and yet there they were, making eyes at each other across the table in that little bar off Sheridan Square.’

‘His visits to California became less frequent. He was in college now, and during the three years, he spent at Brown he went out there only twice. There were other meetings, however, lunches and dinners in New York restaurants, several long telephone conversations (always at her initiative), and a weekend together in Providence with Korngold, whose decade of steadfast loyalty to her had made it impossible for him to feel anything but admiration for the man.’

Park Slope is located in northwest Brooklyn just next to Brooklyn Heights. The neighborhood takes its name from Prospect Park and features many historic buildings, top-rated restaurants, and attractions like the Brooklyn Botanic Garden and the Brooklyn Museum.

‘That Sunday, the two of them went out to explore the territory between Fifteenth and Sixty-fifth streets in western Brooklyn, an extensive hodgepodge of an area that runs from Upper New York Bay to Ninth Avenue, home to more than a hundred thousand people, including Mexicans, Dominicans, Poles, Chinese, Jordanians, Vietnamese, American whites, American blacks, and a settlement of Christians from Gujarat, India.’

As described by Paul Auster, Sunset Park is a vibrant multicultural neighborhood in Brooklyn. In the novel, the abandoned house of Miles, Bing, Alice, and Ellen is located just next to Green-Wood Cemetery, a National Historic Landmark since 2006 and a major New York attraction.

‘His answer comes and goes in just a few seconds, and then they move on to other things, other digressions, other chatter about any number of relevant and irrelevant subjects, but Willa is on his mind now, he can’t shake free of her and watching Korngold and his ex-wife across the table, the comfort and amiability of their interactions, the furtive, unspoken complicity that exists between them, he understands how lonely he is, how lonely he has become, and now that the dinner is nearing its conclusion, he dreads returning to the empty apartment on Downing Street.’

‘She was twenty years old and had just finished her sophomore year at Smith. Alice was going back to Wisconsin to work as head counselor at a summer camp near Lake Oconomowoc, and she asked her if she wanted a job there as well, which was something she could easily arrange.’

‘No, she wasn’t interested in summer camps, she said, she’d had an unhappy experience at camp when she was eleven, and so she wound up taking another job closer to home, for Professor Samuels and his wife, who had rented a place in southern Vermont for two and a half months and needed someone to look after their kids—Bea, Cora, and Ben, girls of five and seven and a boy of sixteen.’

‘He walks into the Hospital for Broken Things at three o’clock on Monday afternoon. That was the arrangement. If he came in after six o’clock, he was to head straight for the house in Sunset Park. If he arrived during the day, he was to meet Bing at his store on Fifth Avenue in Brooklyn.’

‘The house is like no house he has ever seen in New York. He is aware that the city is filled with anomalous structures that have no apparent connection to urban life—the brick houses and garden apartments in certain sections of Queens, for example, with their timid, suburban aspirations, or the few remaining wooden houses in the northernmost parts of Brooklyn Heights, historical remnants from the 1840s—but this house in Sunset Park is neither suburban nor historic, it is merely a shack, a forlorn piece of architectural stupidity that would not fit in anywhere, neither in New York nor out of it.’

‘December thirty-first, late morning on the final day of 2008, and as he steps off the No. 1 train and climbs the stairs to Broadway and Seventy-ninth Street, the air is clogged with snow, a wet, heavy snow is falling from the white-gray sky, thick flakes tumbling through the blustery dimness, muting the colors of the traffic lights, whitening the hoods of passing cars, and by the time he reaches the community center on Amsterdam Avenue, he looks as if he is wearing a hat of snow.’

‘They wind up in a Jewish delicatessen on Broadway in the low Eighties, a throwback to their New York childhoods, the all but vanished cuisine of chopped liver, matzo-ball soup, corned beef, and pastrami sandwiches, pot roasts, cheese blintzes, sour pickles.’

Although it’s not explicitly named in Auster’s novel, the Jewish Deli where Morris Heller and Renzo have lunch together after the funeral of their friend’s daughter is likely Artie’s Delicatessen located on Broadway at 83rd Street.

‘It is ten o’clock in the morning, the first morning of the new year, and he is sitting in a booth at Joe Junior’s, the diner on the corner of Sixth Avenue and Twelfth Street where he last spoke to Miles more than two thousand seven hundred days ago, sitting, as it happens, in the same booth the two of them sat in that morning, eating his scrambled eggs and buttered toast as he toys with the notion of turning himself into the Can Man.’

‘It is the third day of the year, the evening of Saturday, January third, and Morris is having dinner with Mary-Lee and Korngold at the Odeon, not far from the Tribeca loft they have rented for their four-month stay in New York.’

‘You booked a table for dinner at the Waverly Inn, that venerable establishment from the old New York, the New York that no longer exists, thinking Pilar would enjoy going to such a place, and she did enjoy it, she actually said she felt she was in heaven, and as the three of you packed away your Easter dinner, the girl was full of questions, she wanted to know everything about running a publishing house, how you met Renzo Michaelson, how you decide whether to accept a book or not and as you answered her questions, you understood that she was listening to you with intense concentration, that she would not forget a word you had said.’

‘Every Monday, Wednesday, and Thursday she takes the subway into Manhattan and goes to her part-time job at the PEN American Center at 588 Broadway, just south of Houston Street. She started working there last summer, abandoning her post as an adjunct at Queens College because that job ate up too many hours and left her with no time for her dissertation.’

Founded in 1922, the PEN American Center is an organization that works ‘to advance literature, to defend free expression, and to foster international literary fellowship’. Paul Auster is strongly engaged in the PEN’s cause and in 2012 this activism even led to a brief feud with Turkish prime minister Erdogan over the imprisonment of many writers and journalists in Turkey.

‘Instead, she is on her way to meet Ellen, who has Thursdays off, and the two of them will be splurging on a late lunch at Balthazar, the French brasserie on Spring Street in SoHo, less than a two-minute walk from the PEN offices at 588 Broadway.’