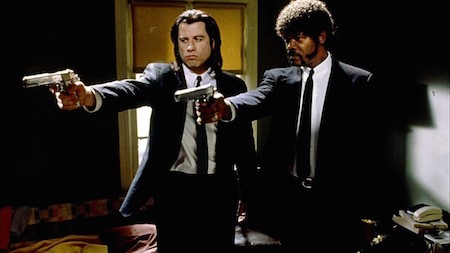 Pulp Fiction became an instant classic when it was released in 1994 and revolutionized the gangster-movie genre with its mix of raw violence and bubblegum pop supported by outstanding actors and perfectly crafted dialogues. Twenty-five years later Quentin Tarantino’s masterpiece has not aged a bit and we thought we’d show our gratitude for all the wonderful hours we spent watching it over and over again by summarizing its filming locations and itinerary on LegendaryTrips!

1. Pumpkin and Honey Bunny Scene at the Diner

Pulp Fiction starts with Pumpkin (Tim Roth) and Honey Bunny (Amanda Plummer), a couple of petty criminals, discussing how it became too dangerous to rob liquor stores and the likes nowadays. After a brief discussion, they come to the conclusion that the diner where they are currently having breakfast is the ideal place for a robbery as the manager and employees won’t oppose any resistance.

The cherry on top and detail that will have quite some importance in the plot later on: besides taking the register they also plan to steal the patrons’ wallets. This leads to this thunderous intro that all of us remember followed by the credits on the classic Dick Dale & his Del-Tones’ surf rock tune Misirlou.

Hawthorne Grill on Hawthorne Boulevard in Los Angeles was used as a filming location for the diner in the scene. Unfortunately, it has vanished since then so it’s not possible to visit it.

Pumpkin: All right, everybody be cool, this is a robbery!

Honey Bunny: Any of you f*cking pr*cks move, and I’ll execute every motherf*cking last one of ya!

We are then introduced to Vincent Vega (John Travolta) and Jules Winston (Samuel L. Jackson), a peculiar pair of gangsters dressed in black suits and discussing Amsterdam and the cultural differences between Europe and the United States while driving.

They park their car at the corner of Van Ness Avenue and Harold Way in Hollywood before surprising Brett and his partners at breakfast.

We should have shotguns for this kind of deal.

Vincent has been asked by Marsellus Wallace (Ving Rhames), his boss, to ‘take care’ of his wife, Mia Wallace (Uma Thurman). Before heading to her house, he makes a detour to his dealer Lance (Eric Stoltz) to buy some heroin. The house of Lance and his wife Jody (Rosanna Arquette) stands in Atwater Village on La Clede Avenue. Vincent will eventually come back to Lance’s house with Mia, but under more dramatic circumstances that time (see a photo of the exterior of Lance’s house with Vincent’s car crashed into it)…

This leads to a legendary scene where we see John Travolta shooting heroin and then reaching the seventh heaven while driving, all this on a great surf rock tune by The Centurions. Glorification of drug use? Well, that’s exactly why we love Tarantino!

Vincent: Thank you. Mind if I shoot it up here?

Although driving high as a kite Vincent reaches safely Marsellus and Mia’s house located on Summitridge Drive in Beverly Hills.

Mia and Vincent head to the Jack Rabbit Slim restaurant, a sort of 50s pop culture temple where they launch into a wild dance on the Chuck Berry’s hit ‘You Never Can Tell’. It’s actually not a real place – a disused bowling alley on Flower Street in Glendale was used as a filming location for the exterior of the restaurant.

Mia: An Elvis man should love it.

Vincent: It’s like a wax museum with a pulse.

The interior scenes at the Jack Rabbit Slim were shot in a built set in Culver City.

7. Boxing Fight ‘Battle of the Titans

We really have no luck with these Pulp Fiction filming locations: after the Jack Rabbit Slim that didn’t exist at all, the Raymond Theatre where Butch Coolidge (Bruce Willis)’s decisive boxing fight takes place has been destroyed since then. It was located on North Raymond Avenue in Pasadena.

After killing his opponent at the ‘Battle of the Titans’ instead of going down as promised to Marsellus Wallace, Butch escapes with the help of sensual taxi driver Esmeralda Villalobos (Angela Jones).

So, what does it feel like to kill a man?

The next day Butch stays at a motel with his girlfriend Fabienne (Maria de Medeiros) and prepares to leave town to escape from Marsellus Wallace. The two lovebirds savor their success but the last challenge arises when Butch realizes that Fabienne forgot to pack his father’s watch that has inestimable sentimental value for reasons best explained by Captain Koons (Christopher Walken).

Just like the Raymond Theatre, the River Glenn Motel on Riverside Drive that was used as a filming location has also vanished.

Butch: I’ll be back before you can say Blueberry pie.

Butch: Okay, maybe not that fast. But pretty fast, alright?

Butch goes back to his apartment to find his father’s watch but in the process also meets Vincent Vega in the toilet reading comics. If their first encounter at Marsellus’ club didn’t go so well this one actually ends up worse. Butch escapes into an alleyway near Kendal Alley.

Butch: You lookin at something, friend?

Vincent: You ain’t my friend, Palooka.

Vincent: I think you heard me just fine, Punchy.

Fate always has something in store to surprise us, even more so when Quentin Tarantino’s mind controls it. After escaping in his car Butch sees Marsellus happily crossing the street with what seems to be a pack of donuts. This happens right outside of Foster’s Freeze on Fletcher Drive (Atwater Avenue) and leads to an incredible chase scene shot as raw footage with no sound effects and a shaky camera style to mirror the difficult stumbles of Marsellus and Butch who are both wounded.

Bystander: That guy was a drunken maniac. He hit you and then he crashed into that car.

Bystander (pointing at Butch): Him!

The chase leads Butch and Marsellus to some dodgy pawn shop. Although the situation gets worse for Marsellus with Butch having the upper hand in their struggle, the pawnshop marks the beginning of a new torment for him.
Crown Pawn Shop on Roscoe Boulevard was used as a filming location for this scene. The place still stands to this day and can be visited; perhaps the most gruesome of Pulp Fiction filming locations due to the scene it’s tied to…

What now? Let me tell you what now. I’ma call a coupla hard, pipe-hittin’ nigg*rs, who’ll go to work on the homes here with a pair of pliers and a blow torch. You hear me talkin’, hillbilly boy? I ain’t through with you by a damn sight. I’ma get medieval on your *ss.

After taking care of Brett and his friends, Jules and Vincent head to Marsellus’ club to give him back his mysterious briefcase. On the way, a little mishap happens with Vincent shooting ‘their guy’ Marvin by mistake. With the car covered with blood, they look for a place to take it off the road quickly. They end up in Toluca Lake, a neighborhood of the San Fernando Valley, at the house of Jules’ friend, Jimmie, played by Mister Quentin Tarantino himself. There they soon receive much-needed help from the Wolf (Harvey Keitel).
It’s unclear though if the scenes at Jimmy’s house were actually filmed in Toluca Lake.

Jimmie: I can’t believe this is the same car.

The Wolf: Well, let’s not start sucking each other’s dicks quite yet.