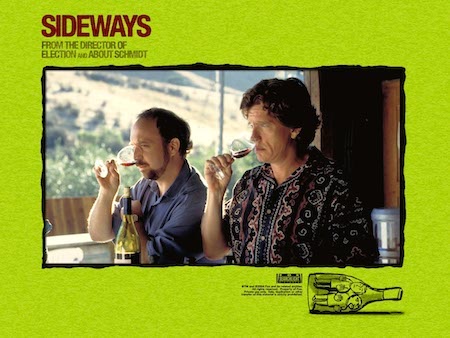 Ever dreamed of going on a wine road trip with your best buddy? Director Alexander Payne takes his characters Miles and Jack on an itinerary through Santa Barbara’s Wine Country in Sideways (2004), a dark comedy about midlife crisis. A great film that doesn’t require a special interest in wine to be appreciated, Sideways is also a beautiful ode to friendship and adventure.

If you like Alexander Payne, make sure to also see the filming locations and itinerary of Nebraska (2013).

For a more extensive itinerary with travel advices, check out also this nice map put together by Visit Santa Barbara.

Sideways starts with a scene showing Miles (Paul Giamatti), the main character, in his natural habitat in San Diego. Like most of the other Sideways filming locations, the actual place is in Santa Barbara.

On his way, Miles passes by the Holiday Inn in Brentwood, famous for hosting Robert De Niro in Heat (1995) directed by Michael Mann.

Miles and Jack start their journey but not without first visiting Miles’ mother in Oxnard (actually San Luis Obispo).

For the first night of their road trip, Miles and Jack stay at the very kitsch Windmill Hotel. In real life it’s the Days Inn in Buellton.

They have dinner at the Hitching Post II, a restaurant where Miles is a well-known patron. There, he recognizes Maya (Virginia Madsen), a waitress he has a crush on. Jack helps him out but Miles’ depressive mood puts an end to the evening and the pair heads back to the motel.

The next day they have breakfast at the Solvang Restaurant in Solvang. Miles’ mood is still rock bottom and the two almost have an argument. Luckily, wine is here to soften the atmosphere as they embark on a day of drinking in Santa Barbara’s Wine Country.

They go on a nice drive through the beautiful vineyards of Santa Barbara’s Wine Country. I don’t know for you but this is really the one scene that made us want to go there ourselves!

610 E. Highway 246 between Buellton and Solvang

Director Alexander Payne takes the opportunity of this driving scene to feature some friendly-looking ostriches. In case you wonder, those beautiful birds are from Ostrich Land located between Buellton and Solvang.

The first stop of the day for Miles and Jack is at the Foxen Winery in Santa Maria where they pour themselves some serious glasses as soon as the female sommelier turns her back.

They continue with the Kalyra Winery where Jack succumbs to the charm of Stephanie (Sandra Oh). He scores a double-date for him and Miles with her and Maya and, in the process, buys a few boxes of wine.

After Miles breaks down when learning that his ex-wife remarried, Jack still manages to convince him to behave nicely at the dinner at Los Olivos Cafe and Wine Merchant in Los Olivos. These precautions lead to the film’s signature line: Miles’ famous outburst where he utters:

‘I am NOT drinking any f*cking Merlot!’

Although he cannot totally shake off his malaise, Miles brightens up with a romance blooming between Maya and him. He takes her bowling with her daughter on Ocean Lanes. The building used to stand on 1420 East Ocean Avenue but has been demolished since then.

In comparison to Miles, Jack’s approach to relationships, especially extramarital ones, is much more.. hmm let’s just say aggressive. He still finds time to play golf with Miles at the Alisal Guest Ranch in Solvang.

The newly formed quartet of Miles, Jack, Stephanie, and Maya escapes from a boring lecture at the Firestone Winery in Los Olivos by sneaking into the wine cellars.

Miles brightens up as he and Maya get closer and have a romantic stroll through Lompoc Farmers’ Market.

Unfortunately for Miles, this idyllic parenthesis does not last long and he soon learns that his novel will not be published. As a result, he tries to drown his sorrow at the Frass Canyon winery (in fact the Fess Parker Winery and Vineyard). Confronted with an unsympathetic waiter who refuses to quench his thirst, he has no choice but to drink the spit bucket. Did someone say ‘Ewww!’?

On the way back to Los Angeles Miles and Jack for a moment of peace and serenity at Gaviota State Park on Highway 101.

They then have dinner at AJ Spurs in Buellton where the incorrigible Jack scores a one-night stand with the waitress.

After Jack’s wedding, totally bummed out by seeing his ex-wife with her new husband, Miles ends up at a burger place in San Diego (actually Orcutt Burger in Santa Maria). There he enjoys his inestimable Château Cheval Blanc Saint-Émilion from 1961 in a paper cup.