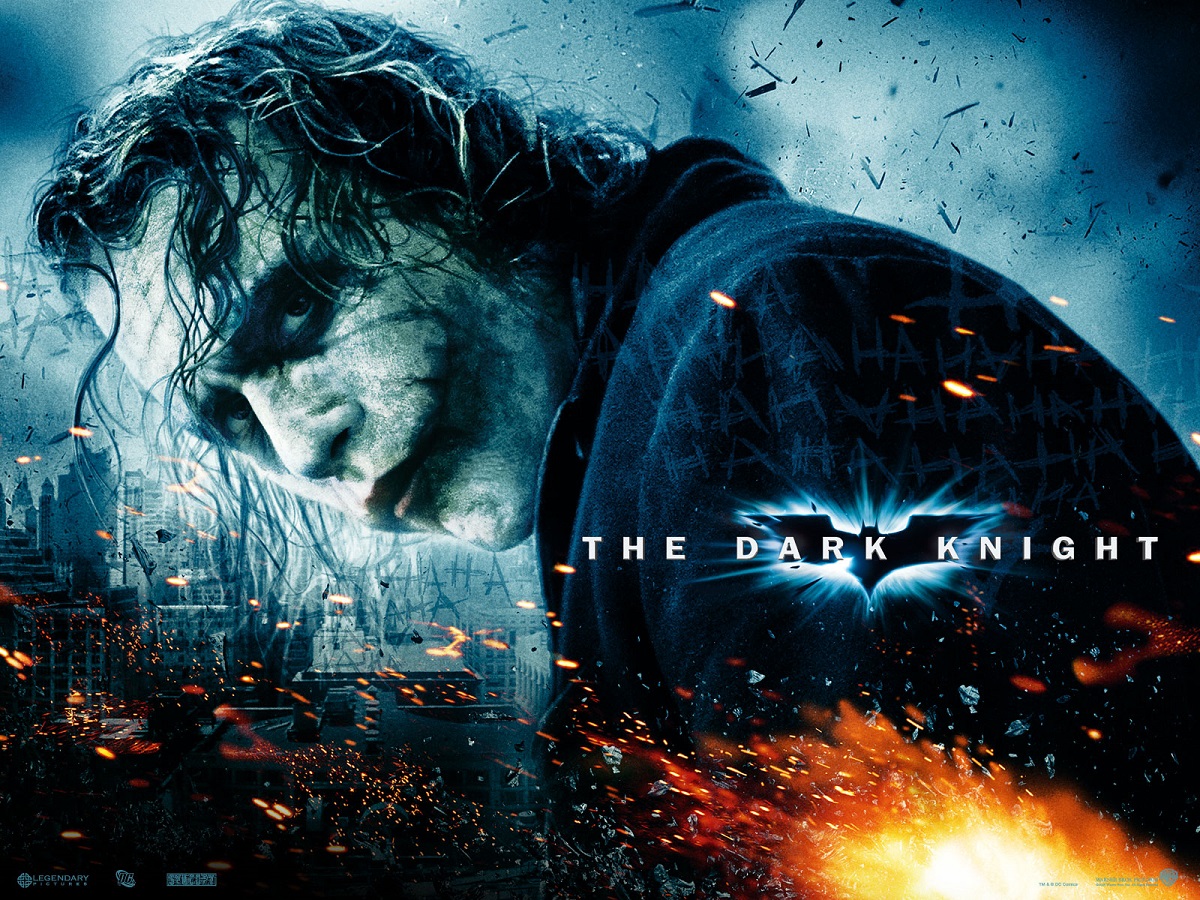 The Dark Knight (2008) is the second film of Christopher Nolan’s The Dark Knight Trilogy. After brilliantly resurrecting DC Comics’ superhero and getting out of the way his life story in Batman Begins (2005), the director takes it to the next level with The Dark Knight.

While building on the dark and epic style of the first opus, The Dark Knight puts Batman in front of a far greater challenge than Ra’s Al Ghul: the Joker. An apostle of chaos and anarchy with nonetheless meticulously elaborated plans, the Joker seems always a step ahead of Batman. While Jack Nicholson’s Joker in Batman’s 1989 film was… well, Jack Nicholson, Heath Ledger (who won an Oscar for the role posthumously), gave birth to one of the most terrifying villains in the history of cinema with his creepy laugh, wicked expressions and disturbing punchlines like “Why so serious?” or “Let’s put a smile on that face!”.

In The Dark Knight, Gotham City stays in Chicago with still a few filming locations in England. The main guest destination is Hong Kong where a few scenes were filmed.

Bank Manager: Oh, criminals in this town used to believe in things. Honor. Respect. Look at you! What do you believe in, huh? WHAT DO YOU BELIEVE IN?
The Joker: I believe whatever doesn’t kill you, simply makes you… stranger.
[/day]

Bank Manager: Oh, criminals in this town used to believe in things. Honor. Respect. Look at you! What do you believe in, huh? WHAT DO YOU BELIEVE IN?

The Joker: I believe whatever doesn’t kill you, simply makes you… stranger.

A night in the life of Gotham post-Falcone era: scared drug dealers trying to get by, Batman copycats looking to help their idol. The parking garage where Batman intervenes to put Dr. Crane aka Scarecrow (Cillian Murphy) behind bars is actually the same as the one used by Batman to reach the rooftops with his Tumbler in Batman Begins.

Dr. Crane: Not my diagnosis!

Wayne Enterprises headquarters are moved to a new location in The Dark Knight: the Richard J. Daley Center located on Washington Street in Chicago. While keeping the dark tone of Batman Begins, The Dark Knight introduces a touch of modern minimalism with this new filming location.

The building is especially famous for its courtyard (Daley Plaza) featuring a 15-meter (50 ft) Cor-ten steel sculpture by Pablo Picasso, a gift from the artist to the city of Chicago in 1967.

The boardroom of Wayne Enterprises where Bruce Wayne takes a nap after a rough but fruitful night is the IBM Building located in Chicago at 330 North Wabash Avenue in Chicago.

The building was designed by architect Ludwig Mies van der Rohe, pioneering master of modern architecture and father of the minimalist style “skin and bones”. It was used for multiple The Dark Knight filming locations besides Wayne Enterprises’ boardroom like the offices of Harvey Dent (Aaron Eckhart), the Police Commissioner, and the Mayor.

The Applied Sciences Division of Wayne Enterprises, previously hosted by ExCel London, was moved to a new filming location in The Dark Knight: the Convention Hall of the West Building on McCormick Place in Chicago.

The restaurant where Rachel Dawes (portrayed by Maggie Gyllenhaal in The Dark Knight instead of Katie Holmes, who passed on the role allegedly because of her husband Tom Cruise) and Harvey Dent are on a date before being interrupted by Bruce Wayne with yet another one of his European flames is the Criterion Restaurant located at 224 Piccadilly in London.

You either die a hero or you live long enough to see yourself become the villain.

Bruce and Alfred go on a cruise with the Russian Ballet to cover Batman’s upcoming trip to Hong Kong. Harvey Dent and Rachel Dawes are left hanging at the Chicago Theater on 175 North State Street.

Bruce Wayne: You look tired, Alfred. You’ll be all right without me?

Alfred Pennyworth: You can tell me the Russian for, “Apply your own bloody suntan lotion.”

The scenes in Hong Kong where Batman exfiltrates Lau to make him face charges in the United States were actually filmed there. The offices of the crooked accountant of Gotham’s mob are in the IFC2 Building at 8 Finance Street on the waterfront of Hong Kong’s Central District. It’s the second tallest building in the city.

Lau: I think, Mr. Fox, a simple phone call might have sufficed.

Lucius Fox: Mr. Wayne didn’t want you to think that he was deliberately wasting your time.

The restaurant where the whole Gotham’s mob is having lunch before being arrested by Lieutenant James Gordon (Gary Oldman) is The Berghoff located on 17 West Adams Street in Chicago.

Salvatore Maroni: You sure you want to embarrass me in front of my friends, Lieutenant?

With Wayne Manor being rebuilt from scratch, Bruce Wayne has to sleep in a penthouse downtown Gotham. The interior of the penthouse is the lobby of the One Illinois Center at 111 East Wacker Drive in Chicago.

The view from Bruce Wayne’s penthouse was not the one from One Illinois Center but instead, it was the panorama from the 39th floor of Wyndham Grand formerly known as Hotel 71 and located on 71 East Wacker Drive in Chicago. The view was digitally added to the scenes in Wayne’s penthouse.

In The Dark Knight, Batman surveys Gotham from the Willis Tower on 223 South Wacker Drive in Chicago in replacement of the Jewelers Building located just a few blocks away.

Bruce Wayne organizes a fundraiser for Harvey Dent, his competitor for the heart of Rachel but soulmate when it comes to fighting crime and corruption in Gotham. The party is soon crushed by the Joker though, which leads to the first confrontation between Batman and his greatest enemy since Ra’s Al Ghul in Batman Begins.

Harvey Dent: Any psychotic ex-boyfriends I should be aware of?

Alfred: Oh, you have no idea.

The memorial service attacked by the Joker takes place on South LaSalle Street in Chicago, not far from the Wayne Enterprises filming location in Batman Begins (Chicago Board of Trade Building).

After the shooting at the memorial service, Batman desperately tries to track down the Joker and gets through to Salvatore Maroni by beating on his goons in a nightclub. The filming location for the club is the Sound Bar on West Ontario Street in Chicago.

Salvatore Maroni: [Batman holds him out over a ledge] From one professional to another, if you’re trying to scare somebody, pick a better spot. From this height, the fall wouldn’t kill me.

Batman: I’m counting on it. [he drops Maroni off the ledge, breaking his legs]

Harvey Dent and Batman finally lure out the Joker by inadvertently pulling the Old Switch-er-oo. After crashing his Tumbler Batman turns it into the Batpod – a massive motorcycle with huge all-land tires – and goes through the Millenium Metra Station in the Chicago Loop.

The first major face-off between Batman and the Joker takes place on South LaSalle Street with the Chicago Board of Trade Building in the background, the former location of Wayne Enterprises.

The duel ends with Batman flipping over the Joker’s 18-wheel truck, one of the most spectacular scenes of The Dark Knight. Even more amazing is the fact that this scene was filmed live in the heart of Chicago’s financial district, not in some studio or anything, mind you.

The explosion of the Gotham General Hospital was filmed at the Battersea Power Station in London with the ex-Brach’s Candy Factory of Chicago serving as the face of the hospital.

Introduce a little anarchy. Upset the established order, and everything becomes chaos. I’m an agent of chaos. Oh, and you know the thing about chaos? It’s fair!

Unleashed by the Joker from Gotham hospital, Harvey Dent, now Two-Face, goes on a revenge spree through the streets of Gotham. He finds detective Wuertz at the Twin Anchors, a restaurant on 1665 North Sedgwick Street in Chicago.

With the bridges and tunnels under direct threat from the Joker, Gotham citizens attempt to flee the city by boat at Chicago’s Navy Pier which entrance is on 600 East Grand Avenue. The water, of course, is Lake Michigan, one of the five Great Lakes.

The final face-off between Batman and the Joker happens at the Trump Tower on 401 North Wabash Avenue in Chicago. Christopher Nolan comes up with a great twist and turns what could be yet just another hostage situation into a riveting experience that paves the way to a great climax.